This was a B Race in my overall plan, and I had to keep that in mind constantly in the lead-up. Whilst 2:26 is good time, as I always say, time alone is often not a true indication of the result. This was true in this case for me at this years NYC Marathon. How did I train for this and how did it fit in? read on for a summary of my approach.

This was my 5th World Major Marathon. I’ve got Boston to go, ideally in 2021. My focus the past few years has definitely been on longer road and trail running events. It’s my strength and what I love working and training for. Every week I’m challenging myself and honing the skills that allow me to compete with the best in the World. It was early this year I first considered Ultra Trail Cape town. Post a DNF at UTA and due to sponsor commitments, this ended up being locked in, Mid-year. New York was already planned, and I was going with many of my Runlab clients on an organised trip with Adventure Time Travel (ATT).

Wanting to peak for UTCT but run well enough at NYC Marathon to get a specific speed adaption was what I was juggling. Only having a structured plan would keep me on track.

A typical weeks straining was

Tuesday 12km easy + Intervals. Intervals were efforts between 3-5 minutes @ my Threshold NOT V02 (this is the first major different to pure Marathon Training). Whilst I was often too tired or heavy to hit a real V02 – I definitely still got an adaption without sacrificing the ability for me to focus on trails.

A Few points on the key sessions.

I did a few sessions on the trail which were between 25-35km where I then finished off with a faster paced finish on the Road. This wasn’t for the Marathon – But to better adapt to my trail running strengths of Leg speed. Race visualisation was practiced, putting myself into race day and the 70km mark, feeling sore and tired with 30km to go – how would I be able to run? Wanting to run well at this point in that pretend race, I was out there practicing it as best I could recreate it.

There are very few people that are great at all aspects of train running. Essentially there are three components. Technical – Hills – Open running. I’m ok at Technical but am naturally gifted and have developed my open running skills. I want the leg speed to run in the good open running sections. I’m also good on the Hills, but I’ve worked many years on developing this, and this is now too part of my trail running success. I actually love being on a hill that’s steep, working hard, but in control and climbing step after step! There is so much more I could talk to you about my training generally but I’m going to round it out by saying that, I also raced on average every second week with minimal to no tapers. This replaces a gaping hole of no Tempo sessions in my Weekly training – It was hopefully perfect for my trail running but meant whilst I was strong, I wasn’t at peak speed!

To run a better Marathon, I would not be able to focus on my trail running.

My biggest volume weeks were built into steadily and over a 6 Week period September-October I averaged 190km a week. A had no injuries, but a lot of challenging days made easier by doing runs with my Champion running buddies.

Now back to that 2:26 and the fact that a time doesn’t tell the story. I didn’t chase an Elite start, B race and focus on the fact I was doing this with Runlab – and these guys are my friends too. I didn’t want to be off doing my own thing race morning, I wanted to do it with the crew. But hey – I mistakenly thought we would be lined up behind the Elites anyway and that would have been totally fine. I could live without the Elite Tent and easier race morning. Luckily unlike almost everyone else, ATT organised us to be bused over to Staten Island early, but then taken to the Hilton Hotel. Here we could relax and have breakfast in comfort. We then got transported to the race precinct arriving about 75 minutes before our scheduled start. Everyone else (apart from the Elites) had been there for about 3 hours. This made the experience so much better, thanks ATT! It was still a 3:30am wake up though. 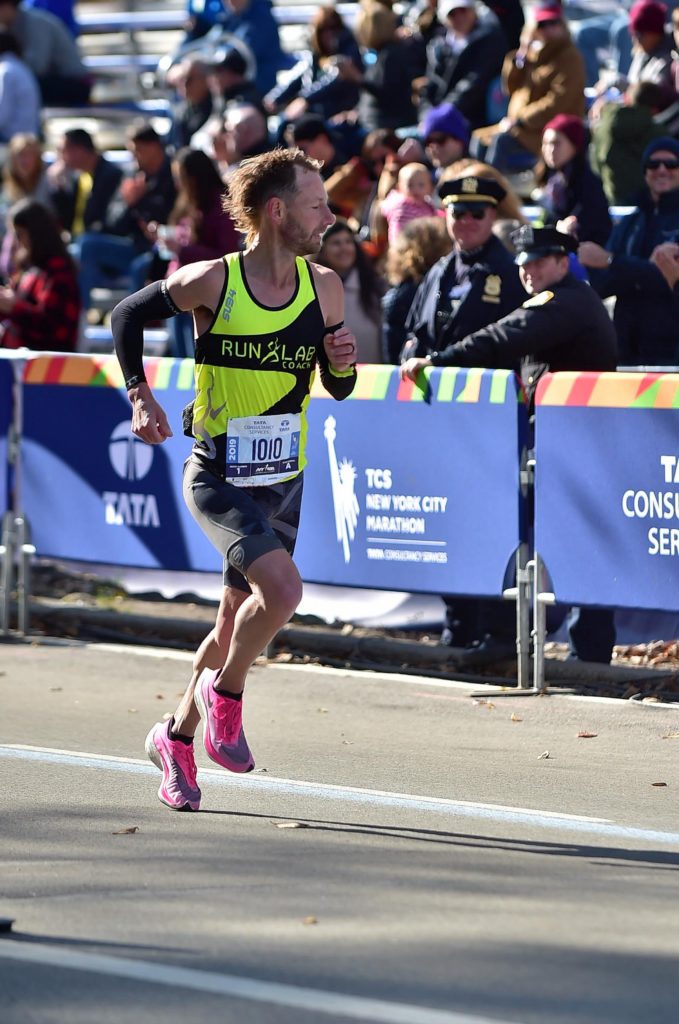 For the Mullet Lovers.

Majors are crazy! When over 50 thousand people are just doing the Marathon distance it’s pretty full on. Once dropped toilet stops, bags drops and walking to the Coral meant we had 15 minutes only until we were led onto the bridge. Now with the A runners I was locked into race mode. No warmup possible as we were crammed in a small area, but I did get about 5 minutes of circle jogging in. I was still protected with old clothes and tights and a Poncho given with the race kit, specifically for this. Temp 5 degrees with a headwind, mmmmmmm. We were shuffled onto the bridge and ended up behind many rows of other runners. At the time those that were with me and myself thought that these people were just there for the pre-race entertainment and ceremonies. The Elites where in front of this group! Bang (cannon) and off. A crazy fight to try and even run, must have taken at least 2 minutes to be able to run freely as we worked through this group, many of them just jogging (I think they were event legends, runners having completed this race many times prior) either way it wasn’t ideal for them or those of us in the A group actually trying to run quickly. 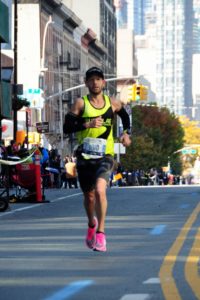 Breaking free finally I could see the Elite pack about 500 metres ahead on top of the bridge, so I lost time here, but it didn’t affect me. I quickly realised that there were a few others about 40 metres in front also from my A group and a little pack formed, I think my second km split was a 3:05 or something as I surged into this little group. Pretty soon though there was no such pack, there were about 4-5 of us way out in front of our group and way behind the Elites. That’s pretty much how it stayed!

Gel at 15km and 30km with all up 2 mouthfuls of water was my nutrition, although unfortunately I had the worst stomach upset and was forced at 32km to stop and go to the toilet, lost another minute, but again I didn’t let it affect me.

The crowd and course were simply amazing. I cannot tell you in words what I feel, even now as I write about it, it’s just an emotion that comes over me of another life changing experience. I tell you, get out there and do something like this, you grow from it.

With the lost time, on a challenging course and with long sections of headwind- the actual running effort was about 2:22, it was exactly what I planned and hoped to run. The actual time whilst disappointing, is accepted totally by me considering all of this. I had run and got a benefit. When running and hitting my splits below 3:20 per km, by myself, I felt good. Over the course of the afternoon as our runners all finished and we all connected, the collective euphoria was special. 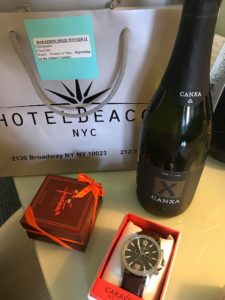 Nice surprise from the Beacon Hotel

As soon as I got my bag and was walking back to the hotel, I was tracking all the runners with understandably focus on Cheryl (My Wife). At that time, she was on 3:44 Pace, she was about 30km in, I was starting to feel relief. Her own year and lead-up had been dramatic, you will see her own story somewhere. In August she was in ICU – the thought of even going to New York was not looking viable for about 2 weeks, and then still would she even recover and sort of be able to train? Well she pretty much held that pace, finishing smiling and totally absorbing the moment and event, a few days post she admitted she could have run faster, but it wasn’t about that this time! 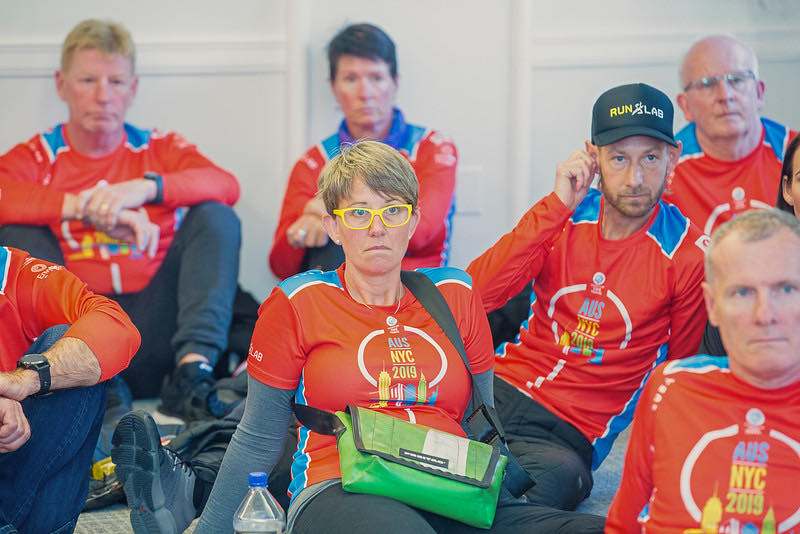 Sharing the reward with the team just before heading out to dinner.

The acknowledgment of pretty much any new Yorker of your effort was genuine, for me topped off by being “Fastest runner in the Hotel” and being gifted a bottle of Champaign, chocolates and a Watch! There were over 400 runners in the Hotel. 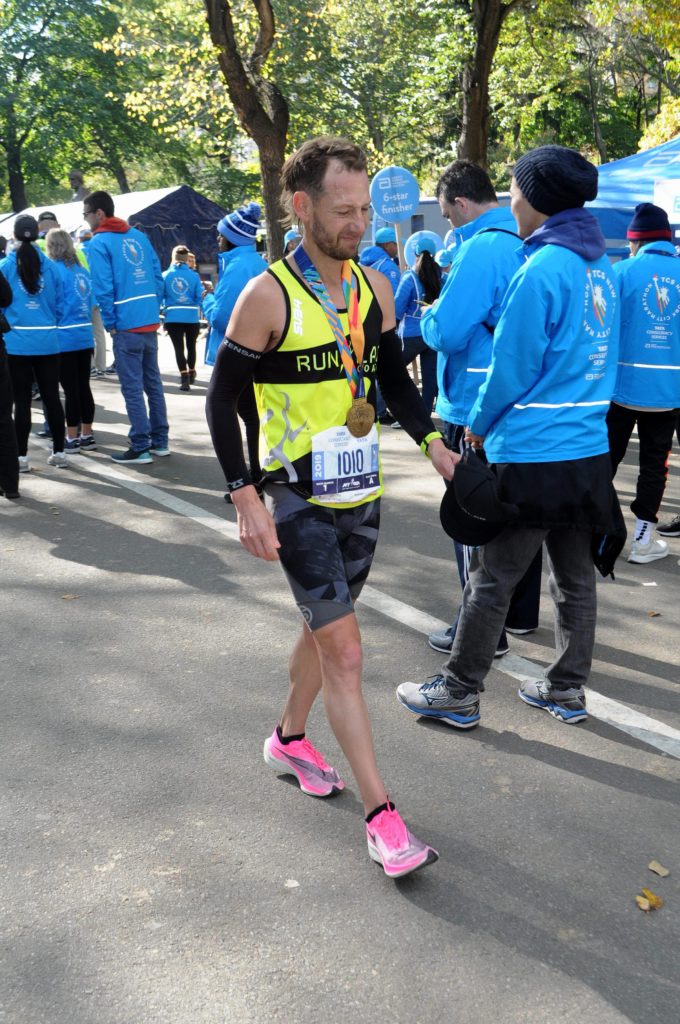 Ha ha so telling of my thoughts, processing the time. not great but good considering.

Everyone in our group has walked away from this for the better, it was more than a run! 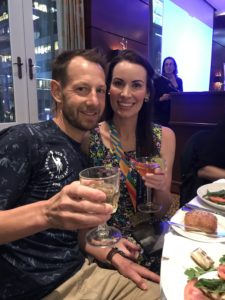