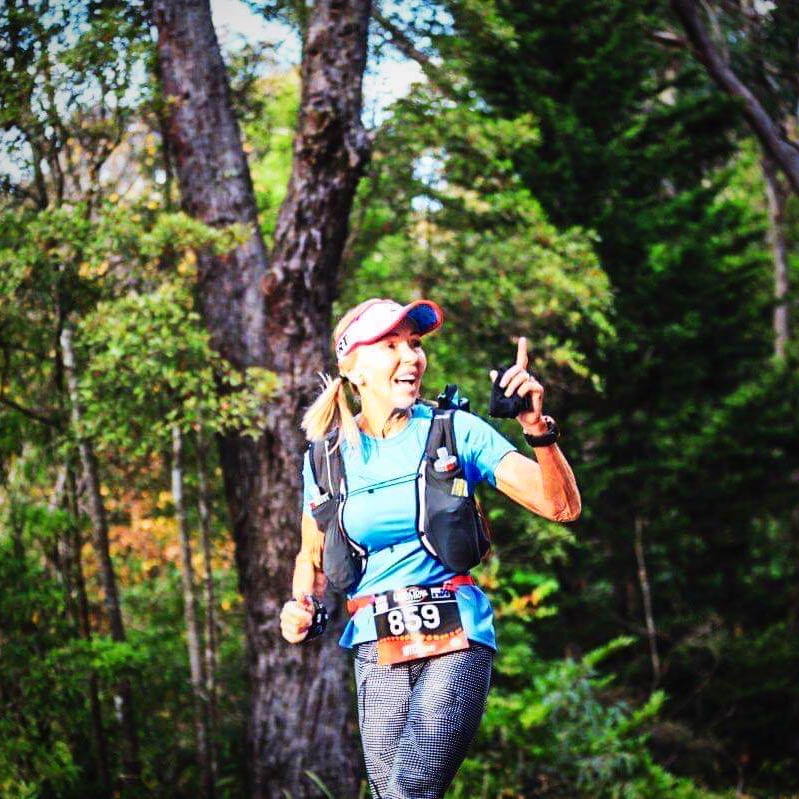 In May this year I completed UTA100 km – a dream of mine that I’d been holding onto since finishing the 50 km in 2017 – even taking away a bronze buckle for completing it under 20 hours.  The months of hard training beforehand meant that I could thoroughly enjoy the day itself, carrying with me only positive vibes.

I started running with Runlab for three reasons:

When not running you may find me:

My favourite session is:

It goes without saying that MyTrailgroup sessions have to be my favourite, despite being pushed far beyond anything I would normally consider myself capable of.  It is a common belief that training for UTA has to be stairs, stairs and more stairs; however, during these sessions it became clear that there are many, many trail specific techniques that need targeting.  I love the fact that they are held in a variety of locations too – bush, fire trails, beach, hills, rocks, stairs/steps – in sunshine and in rain – anything we might expect to experience on a Trail Race.

For me, it’s the team spirit and the feeling of ‘belonging’ – in a sport which isn’t often regarded as a ‘team’ type of thing. Yes, it is true, that on race day we will be on our own, but every trail runner knows that every person out there is on the same page. During a Runlab session you know that the coaches and other members of the group will be there to support you, cheer for you, help you, encourage you and pick you up when you fall down.  I think that’s why each one of us digs deeper in these sessions than if out alone.  There are no failures –  everyone gives 100%.

It is knowing that the coaches can adapt the sessions too according to their runners’ needs – tired, poor weather, injuries, tapering for races and even hormonal (if you’re female!)

It is that feeling of having given your best, feeling physically shattered, then miraculously at those words ‘you’re finished’- looking around to see everyone wearing their widest smiles – that’s what I like!
I’m targeting:

I’ll be heading off with the Runlab team to complete the NYC Marathon. I’m going to hike the Great Australian Alps Walking Track in Victoria and then heading to New Zealand to complete the Tarawera Ultramarathon in Rotorua, New Zealand next February.