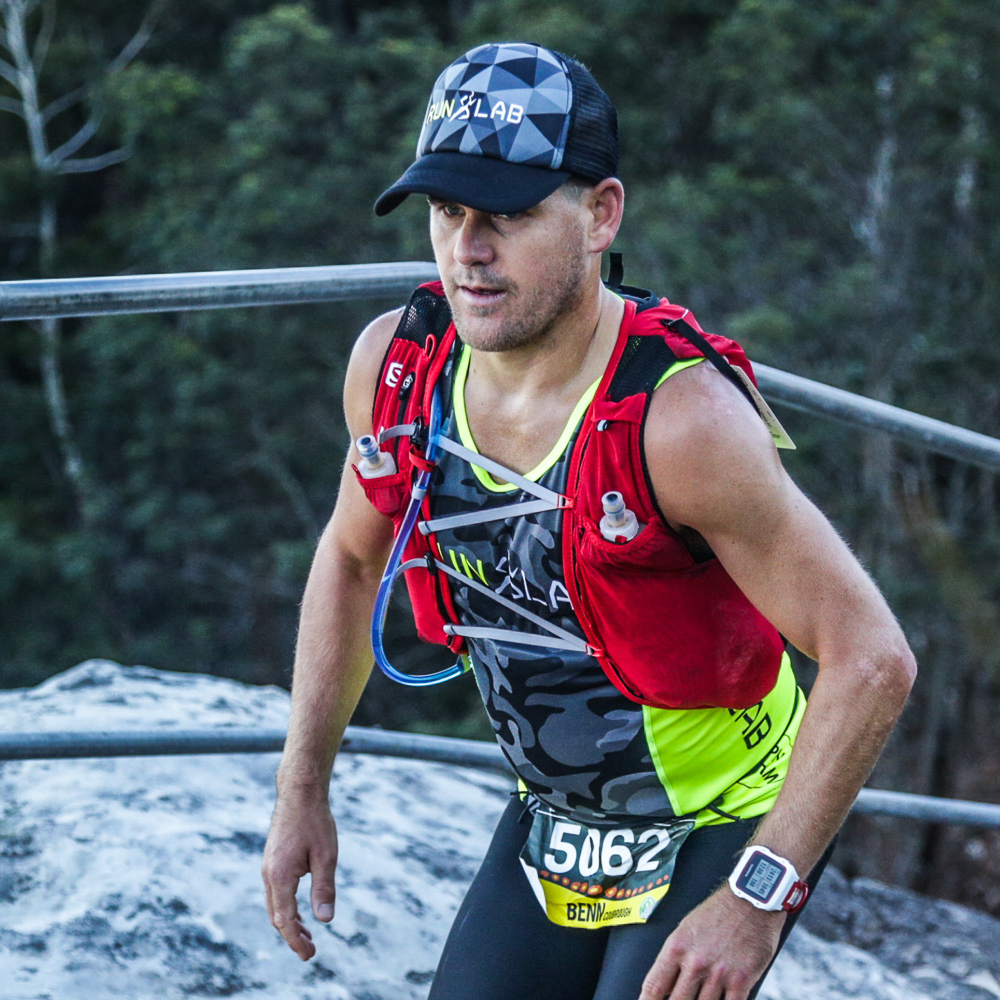 With 20+ years experience in competitive football, coaching and personal training, Benn brings a wealth of knowledge to Runlab as a coach to MyRunGroup, MyTrailGroup and RunStrong groups.  He also trains with the Runlab Elite Hunter running group.

Benn says the best part about running is the simplicity and hopes to inspire Runlab-ers on their journey. “Running is my time to be with myself. I can throw my shoes on and just get out there.” His passion is taking people from what they perceive as their “limit” to higher limits, joining them for the journey and watching them achieve their dream is Benn’s reward.

A personal attitude: desire, determination and disciple sums up Benn’s approach to his own training and coaching is his strong sense of accountability: “knowing I’ve set myself different challenges to achieve gets me out the door each morning and  setting a high standard for my athletes.”
Football was the original passion, endurance running events came later. Competing in NSW Football State League and South Coast Premier League during his youth when an injury, a torn hamstring forced a change in pace. To reduce the risk of reinjury in this high impact sport, Benn eventually switched his focus to endurance events, initially building up to running thirty minutes consecutively, to running and triathlon, competing in his first full Ironman 2014.

Moving from football to running races required a completely different approach. “On football field, I’d run 10-15km in a match but it’s stop-start, a lot of sprinting compared to endurance races, I’ve had to learn how to use different energy systems: rebuilding the engine, training myself to run further distances and running longer.  “Running became a new focus for me, a new goal and a sport to work around the injury.”
Hyperactive and never still, Benn’s competed in multiple Ironman and running events around the world. Not satisfied with the standard events on the racing calendar, in 2016, Benn dreamt up his own event, to further test his body and mind, and find his limits: a 24 hour Ironman comprising of four consecutive, back to back 4 x Half Ironman.

Close to finding his limits; Benn was nearly forced to pull out developing hyperthermia during the last quarter of the race, at 2:00am, pulled through and completed the challenge at ParkRun 7:00am. A Guinness World Record-worthy effort and a personal new limit set.

Benn’s approach is 100% belief in his athletes potential by giving them the support they need to achieve their goals. “The best part of my role as a coach is showing them the path to achieving their dreams and walking through the process with them. Showing them what they thought was impossible, possible.

At his first 50k ultra-marathon, UTA 2018 he found a new limit and attraction to running and on the trails, spending most of 2018-2019 training for the UTA 100 and other Trail races, achieving some good results with 2nd GNW 50miler and 3rd in the 70km Alpine Challenge, having a broken toe towards the end of 2018, now able to get back into some speed, using this to work on developing to improve and build towards bettering his results in 2019-2020.
Benn’s next goal after tackling the 100K at UTA 2019,  is to improve on his placing and time to get closer and cracking the Top 10 in 2020. Improving some speed, training with the Runlab Elite Group and under the watchful eye of Vlad. Living and breathing the Runlab philosophy “achieving your impossible”.